We've had some nice weather lately and we've started getting the garden in. I'm changing the layout quite a bit from what we did last year. This year the onions are going in the side bed. 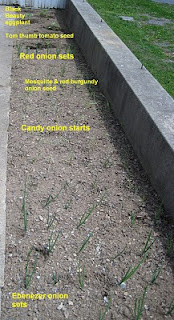 The eggplant remain at the far end and in the little space between I've planted out the Tom Thumb cherry tomatoes I started from seed. The seedlings suffered a dose of stress when I moved them out to the garage to harden off and the same week we were hit with 80 degree temperatures. They got a bit fried in the sunny window. I've since repotted them and moved them to my patio where they seem to be reviving. At least there's some new growth coming out above the withered leaves. Fingers crossed they pull through. The onion seedling also don't seem to be fairing well after being transplanted. I'm having the best luck with the onions sets I've planted, but they don't come in nearly the variety you can get in seeds or plants. Since this was my first year trying onion seeds I'll be keeping an eye on them to see how they turn out in the end.
The big bed is also very different.

We've planted the tomatoes and peppers around the perimeter. In the middle are squash, broccoli and cucumbers. I've used old cat litter jugs with the tops and bottoms removed to protect the broccoli from the cruciforous loving bunnies. Along the front edge I'm planting kohlrabi and radishes at 2 week intervals to extend the harvest. Next week I'll put out the okra seeds in the long bed that runs along the wall to the right of the big bed. This is my favorite part of gardening. I love getting the plants in with all their promise of yummy goodness to come.
I was the lucky winner of a Barnes and Noble gift certificate recently and expanded my library with these lovely books 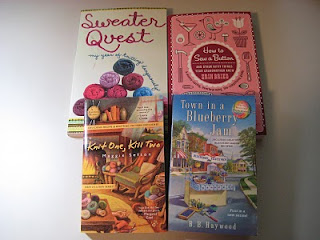 First up is Sweater Quest

about a woman's quest to knit an Alice Starmore fair isle sweater. For the uninitiated, AS has written some of the most stunning and highly sought after patterns in the knitting world. Her books are mostly out of print and some frequently sell in the hundreds of dollars range. I'm excited to read Adrienne's account of knitting one of these masterpieces.
Next is How to Sew A Button

, a delightful little book full of grandma's wisdom.
Rounding out the foursome are two cozy mysteries...Knit One, Kill Two

and Town in a Blueberry Jam

. Somehow I found I have the second in Maggie Sefton's series, but I really prefer to start at the beginning in a series. Currently I'm finishing up Grime and Punishment

which was the April cozy selection in the Ravelry Whodunit? group. It's a good little mystery, nothing too shocking or gory.  Next up for the group is Crewel World

which sounds great. But I'm undecided if I'll read it with so many other books already in line!
I decided to treat myself to a few knitting books as well. 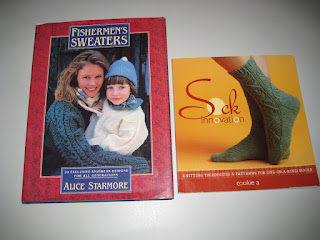 . And I picked up one of the few attainable Starmore books, Fisherman's Sweaters

, from Amazon's used books options for $10. Both of these books are mainly eye candy and inspiration. The patterns are to die for. Drool worthy. Stunning. I could go on and on. I will someday knit a Starmore. Likely one of her cabled sweaters and not a fair isle. And I will certainly knit more Cookie A socks (I've already done her Monkey socks twice).  For now I'll just enjoy the view.

Words to Live By

Everything works out in the end. If it has not worked out, it's not the end.

The Clancys of Queens: A Memoir